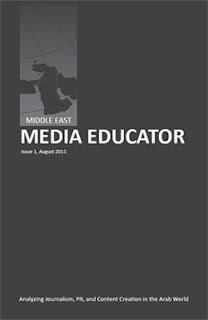 "Middle East Media Educator (MEME) is a refereed journal published annually at the University of Wollongong in Dubai. It was inspired by and takes as its model Asia Pacific Media Educator (APME) which has been published at the University of Wollongong in Australia since 1996, founded and still edited by Eric Loo. Like APME, MEME "aims to bridge the gap between media educators and practitioners."

MEME is the first such journal in the Middle East, and it will strive to encourage dialogue between industry and academe in a region where informed analysis of the media isn't widespread. Educators struggle to find textbooks and case studies that are relevant to the unique situation in the Middle East region because most teaching resources are developed in other parts of the world.

Research articles and commentaries about the state of the media, media professions, media education, and other topics relevant to the region are welcome. Until study of the media, media professions, and media contexts in the Middle East becomes far more widespread, MEME will tend to be eclectic in its editorial policy. We welcome articles for Issue 2 in August 2012 and will consider abstracts and article proposals for that issue by the end of December 2011."

PDF
Arab Media during the Arab Spring in Egypt and Tunisia: Time for Change
Rasha Owais

PDF
Social Media and Its Effectiveness in the Political Reform Movement in Egypt
Serajul I. Bhuiyan

Posted by Peter Magierski at 5:20 PM

Email ThisBlogThis!Share to TwitterShare to FacebookShare to Pinterest
Labels: Media