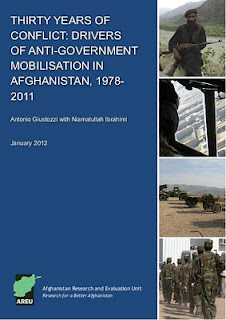 Thirty years of conflict : drivers of anti-government mobilisation in Afghanistan, 1978-2011 by Antonio Giustozzi with Niamatullah Ibrahimi, (2012)

"A new paper by Dr Antonio Giustozzi traces structural factors driving anti-government mobilisation in Afghanistan in each successive phase of the country’s thirty years of conflicts. Drawing on extensive literature from both international and Afghan sources, it analyses the social and political forces behind the ideological war of the 1980s, the factional conflict of the 1990s, and the current insurgency. In doing so, it explores how such an extended period of warfare has fundamentally reshaped Afghan society, spurring changes which have in their turn altered why the conflict is fought. The study also devotes specific focus to examining the Taliban as an example of a political organisation enabling and driving conflict. Starting with the origins of the Taliban insurgency, it goes on to explore what is known about its ability to mobilise communities and the kind of non-military, tacit support it receives from them. It also looks at the role played by different groups of individuals such as mullahs, madrassa students and young people, and the economic and funding dimensions of the movement. 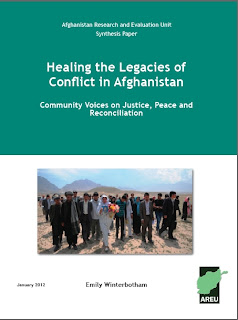 Healing the Legacies of Conflict in Afghanistan: Community Voices on Justice, Peace and Reconciliation

This paper synthesises the findings from AREU's Legacies of Conflect research project from across the Bamiyan, Ghazni an... Read More

Afghanistan Research and Evaluation Unit (AREU) is an independent research institute based in Kabul. AREU's mission is to inform and influence policy and practice through conducting high-quality, policy-relevant research and actively disseminating the results, and to promote a culture of research and learning.

Posted by Peter Magierski at 11:45 AM

Email ThisBlogThis!Share to TwitterShare to FacebookShare to Pinterest
Labels: Afghanistan