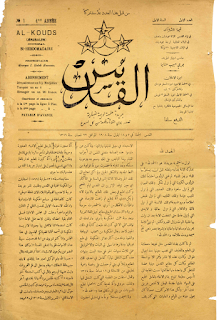 "The Center for Palestine Studies (CPS) at Columbia is proud to launch, in conjunction with the Institute for Palestine Studies in Ramallah, the archives of this forgotten gem over a century after its birth in Jerusalem. Established in 1908 by Jurji Habib Hanania (1864-1920), al-Quds became the first privately owned public daily newspaper in Palestine."