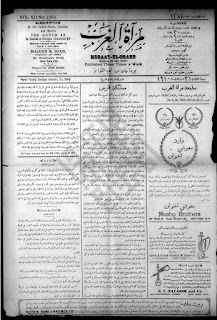 "Mira’at al-Gharb, [Mirror of the West], was one of the longest-running Arabic newspapers in the United States, published from 1899 until 1961. It was founded by Najeeb Diab and owned by his family until its closure. In addition to its significant longevity, Mira’at al-Gharb is important for its affiliation with the Orthodox faith. As a counterpoint to the Maronite viewpoints that are often predominantly associated with the early Syrio-Lebanese immigrants, Mira’at al-Gharb provides valuable insight into the religious, political, and intellectual diversity of the early immigrants from Greater Syria..."

See: Alphabetical List of Open Access Historical Newspapers and Other Periodicals in Middle East & Islamic Studies
Posted by Peter Magierski at 11:03 AM