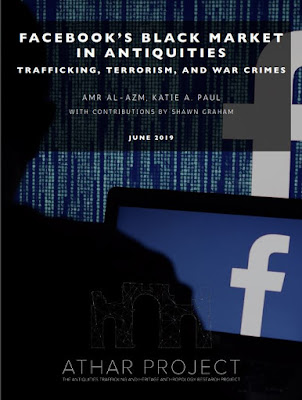 
"Facebook’s “Groups” feature, which allows users to create and control a contained network of individuals with “shared interests,” has become a facilitator for the expansion of antiquities trafficking networks. The Groups provide a seamless environment for digital interactions and cross-border networking between users interested in buying and selling antiquities, allowing them to communicate efficiently and discretely. The ATHAR Project’s report covers nearly two-years of investigative research and incorporates a case study on Groups based in Syria.
EXECUTIVE SUMMARY
Facebook’s rapid growth and lack of internal policing mechanisms over the past decade have helped the platform become a digital black market where users buy and sell goods, including illicit antiquities, from some of the world’s most conflict-ridden nations. The social media platform has marketed itself as a tool for the global dissemination of ideas and information. In the process, however, it has unwittingly expanded the communication abilities of transnational criminal networks the world over.
Today, Facebook offers a veritable digital toolbox for traffickers to utilize, including photo and video uploads, live streaming, disappearing ‘Stories,’ payment mechanisms, and encrypted messaging. Facebook is the perfect platform for a one-stop-shop black market..."

Posted by Peter Magierski at 2:27 PM