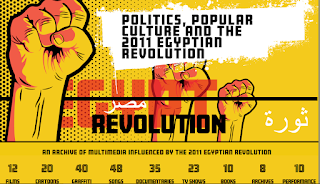 "Politics, Popular Culture and the 2011 Egyptian Revolution" is a digital archive documenting the 25 January 2011 uprising and its aftermath through the prism of popular culture. It has been designed for both researchers and students interested in the 2011 Egyptian revolution, as well as contemporary Egypt and the relationship between politics and popular culture more broadly.

From pop music to graffiti to satirical TV shows, popular culture played a vital role in articulating political meaning 'from below' in the wake of the 25 January 2011 uprising. The archive includes a wide range of Egyptian popular cultural texts and seeks to create a greater understanding of the significance of the 2011 uprising and its aftermath for everyday Egyptians as well as the relationship between politics and popular culture in a revolutionary context..." read on.
Posted by Sean Swanick at 1:05 PM