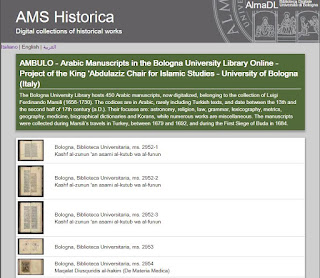 "The Bologna University Library hosts 450 Arabic manuscripts *, now digitalized, belonging to the collection of Luigi Ferdinando Marsili (1658-1730). The codices are in Arabic, rarely including Turkish texts, and date between the 13th and the second half of 17th century (a.D.). Their focuses are: astronomy, religion, law, grammar, lexicography, metrics, geography, medicine, biographical dictionaries and Korans, while numerous works are miscellaneous. The manuscripts were collected during Marsili’s travels in Turkey, between 1679 and 1692, and during the First Siege of Buda in 1684."

* - Although the site claims 450 digitalized manuscripts only 29 are available. The remaining manuscripts will be added to the site next year.

Posted by Peter Magierski at 7:07 PM