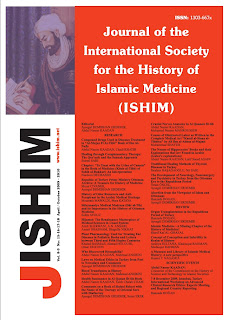 Journal of the International Society of Islamic Medicine (JISHIM)

There is a consensus amongst researchers of the history of medicine that early Arab and Muslim physicians had played a very important role in the development of medical science during the renaissance of Islamic civilization, which spanned for eight centuries. This was achieved through translating earlier medical and scientific scripts and developing these sciences in the light of their clinical expertise.

Despite the above fact, it is well-known that, as yet, the full potential of the Islamic medical heritage has not been investigated in a way that shows its real role and importance in the development of modern medicine; especially its effect on the European Renaissance. So far, only a little part of this important heritage has been studied or come to light. Most of the scripts of Islamic medicine are dusting on the shelves of private and some public libraries around the world.

In the light of this, a number of physicians, scholars and historians called for reviving this heritage on an international level. This is to be achieved through organization and teamwork. And this is how the idea of the International Society for the History of Islamic Medicine emerged.

The first meeting of this society convened between 1-3 December 2000 in Doha (QATAR) and was chaired by HE Dr.H.A.Hajar Al-Binali, Minister of Health in Qatar. A number of physicians and historians have attended this meeting.