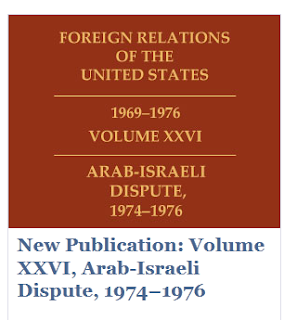 "August 15, 2012. The Department of State released today Foreign Relations of the United States, 1969–1976, Volume XXVI, Arab-Israeli Dispute, 1974–1976. The focus of this volume is the negotiations leading to the two disengagement agreements between Egypt and Israel and the one disengagement agreement between Syria and Israel. The end of the October 1973 War left the Egyptian and Israeli armies interlocked in the Sinai and Israeli and Syrian armies interlocked in the Golan Heights. This provided Secretary of State Henry Kissinger, who had taken the lead role in negotiations concerning the Arab-Israeli dispute after the October 1973 War, the opportunity to negotiate landmark agreements between Israel and two of its Arab neighbors in the months following the war. Initial discussions between Kissinger and Arab leaders began in November 1973 (coverage of this is found in Foreign Relations, 1969-1976, volume XXV, Arab-Israeli Crisis and War, 1973) and culminated in formal disengagement agreements beginning in 1974..."

Posted by Peter Magierski at 11:21 PM