Open Access E-book: Modernity, Minority, and the Public Sphere: Jews and Christians in the Middle East

Modernity, Minority, and the Public Sphere: Jews and Christians in the Middle East 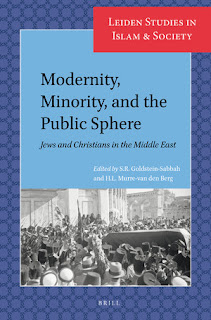 "Modernity, Minority, and the Public Sphere: Jews and Christians in the Middle East explores the many facets associated with the questions of modernity and minority in the context of religious communities in the Middle East by focusing on inter-communal dialogues and identity construction among the Jewish and Christian communities of the Middle East and paying special attention to the concept of space.This volume draws examples of these issues from experiences in the public sphere such as education, public performance, and political engagement discussing how religious communities were perceived and how they perceived themselves. Based on the conference proceedings from the 2013 conference at Leiden University entitled Common Ground? Changing Interpretations of Public Space in the Middle East among Jews, Christians and Muslims in the 19th and 20th Century this volume presents a variety of cases of minority engagement in Middle Eastern society."

Posted by Birte Kristiansen at 8:30 AM