Open Access E-Book: The Hajj and Europe in the Age of Empire

The Hajj and Europe in the Age of Empire 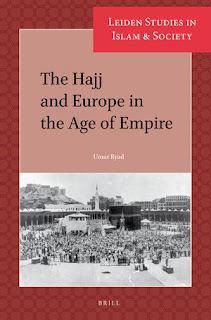 "The present volume focuses on the political perceptions of the Hajj, its global religious appeal to Muslims, and the European struggle for influence and supremacy in the Muslim world in the age of pre-colonial and colonial empires. In the late fifteenth century and early sixteenth century, a pivotal change in seafaring occurred, through which western Europeans played important roles in politics, trade, and culture. Viewing this age of empires through the lens of the Hajj puts it into a different perspective, by focusing on how increasing European dominance of the globe in pre-colonial and colonial times was entangled with Muslim religious action, mobility, and agency. The study of Europe’s connections with the Hajj therefore tests the hypothesis that the concept of agency is not limited to isolated parts of the globe. By adopting the “tools of empires,” the Hajj, in itself a global activity, would become part of global and trans-cultural history."

Posted by Birte Kristiansen at 1:10 PM