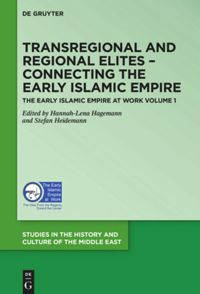 "Transregional and regional elites of various backgrounds were essential for the integration of diverse regions into the early Islamic Empire, from Central Asia to North Africa. This volume is an important contribution to the conceptualization of the largest empire of Late Antiquity. While previous studies used Iraq as the paradigm for the entire empire, this volume looks at diverse regions instead. After a theoretical introduction to the concept of ‘elites’ in an early Islamic context, the papers focus on elite structures and networks within selected regions of the Empire (Transoxiana, Khurāsān, Armenia, Fārs, Iraq, al-Jazīra, Syria, Egypt, and Ifrīqiya). The papers analyze elite groups across social, religious, geographical, and professional boundaries.

Although each region appears unique at first glance, based on their heterogeneous surviving sources, its physical geography, and its indigenous population and elites, the studies show that they shared certain patterns of governance and interaction, and that this was an important factor for the success of the largest empire of Late Antiquity"

The contents of the book can be seen here

Posted by Birte Kristiansen at 6:02 AM