The Center for Islamic Sciences (CIS) is dedicated to the promotion of research and diffusion of knowledge on all aspects of Islam. CIS encourages a creative exploration of natural and human sciences from the Islamic worldview, critical integration of contemporary disciplines into the framework of traditional Islamic thought and learning, and a renewed and rigorous link with the intellectual tradition of Islam. CIS supports activities aimed at enhancing our religious and scientific understanding of nature and the human condition. The Center recognizes an underlying unity of all branches of knowledge as stemming from and anchored in Unicity of God (tawhid), the most fundamental principle of Islamic ontology and epistemology. Seen from this perspective, the entire manifest world, from the lowest to the highest levels, is recognized as an integrated and interconnected system. CIS recognizes this cosmic hierarchical structure, with its underlying unifying principle of tawhid, and operates within the epistemological framework of the Qur’an.


CIS publishes a semi-annual journal Islamic Sciences (JIS).  JIS is a journal of Islamic perspectives on science, civilization and intellectual history. It is dedicated to a creative exploration of the natural and human sciences. The journal publishes articles which critically evaluate contemporary knowledge as seen from within the framework of traditional Islamic thought and learning. It explores ways to renew rigorous and productive links with the intellectual tradition of Islam in order to enhance our understanding of God, life, the cosmos and the human condition.

Alphabetical List of Open Access Journals in Middle Eastern Studies
Posted by Chuck Jones at 8:21 AM No comments:

Alphabetical List of Open Access Journals in Middle Eastern Studies
Posted by Chuck Jones at 7:19 AM No comments:

Alphabetical List of Open Access Journals in Middle Eastern Studies
Posted by Chuck Jones at 11:41 AM No comments:

Posted by Peter Magierski at 9:59 AM No comments:

Early in March 1997, Lady Elizabeth Bingham, a very dear friend and colleague at SOS Sahel UK (a charity that helps the people of the Sahel to fight poverty through better management of their environment) was passing through Cairo from Sudan where she was inspecting some of SOS Sahel’s projects. I happened to mention to her that I have been searching for a book for the last ten years without success. The book was “Capital Investment in Africa – Its Course And Effects”, by S Herbert Frankel, Professor of Economics and Economic History at University of Witwatersrand, Johannesburg. The book was published by Oxford University Press in 1938. Sir Hubert Huddleston, Governor-General of the Sudan (1940-47) had quoted a passage from it in his 1941 annual report. The quotation was:


“There can be doubt that the economic development of the Sudan in the twentieth century has been a remarkable achievement and one which, in many respects, can be regarded as a model for other African Countries”.

That quotation intrigued me, and I wanted to read everything he had written about Sudan in that book.

Within days of Lady Elizabeth’s departure from Cairo to London, I received a copy in the post of the book. In her accompanying letter she informed me that her book seller had put her in touch with a certain Paul Wilson, an antiquarian book dealer who specialised in African and Middle-Eastern books. He not only had the book, but he informed her that he also had a large collection of books about Sudan for which he was seeking a buyer. I telephoned her immediately, thanked her for her efforts and requested her to contact Paul Wilson and inform him that I am interested in his collection, and that he should not sell it until I had had a chance of seeing him and it. A couple of weeks later I flew to London, took the train to Shrewsbury, met Paul and within a couple of hours we had shaken hands on a deal.

Paul’s collection, at the time, amounted to about 850 books. I requested of him that he continue looking to add books, documents, maps and paintings to the collection, He has been doing that for me for the last ten years, with the collection now boasting approximately 2,000 books, double that number of historical documents, pamphlets and maps, paintings and photographs.

The idea was to move the whole collection to Sudan after securing an appropriate home for it there. But after five years of fruitless search and broken promises from the authorities there, I decided to instead loan the Collection to a University that provides courses in Sudanese Studies, so that as many scholars can benefit from it as possible, rather that for it to remain in boxes in a warehouse in England. The obvious choice was the University of Bergen, because of their extensive Sudanese courses and its long and close co-operation with Sudanese Universities, especially the University of Khartoum.

On the last day of the conference on Sudanese Studies, which was successfully hosted by the University of Bergen in April 2006, I informed my friend Professor Anders Bjorkelo, the Director of The Centre for Middle-Eastern and Islamic Studies, of my intention. He was thrilled with the idea and obtained the approval of the University within days. Early in June 2006, Paul and I flew to Bergen on the same day that the books arrived by truck from Shrewsbury, England.

The Collection was received with great enthusiasm and appreciation by everybody at the University, from the Rector down to the under-graduate students. The books were unpacked and arranged on to their shelves in a room provided for their housing at the Centre. The books were made available for study, and the University has kindly provided funds for the scanning and digitalising of the books which appear on this website, completely free of charge.

I wish to express my appreciation and gratitude to everyone at the University who helped and participated in this worthwhile endeavour.

Collections in this community

Posted by Chuck Jones at 4:26 PM No comments:


"[The] second part continues with an audiovisual inventory of the traces that history has left, a manifestation of Palestine in this century. This second part includes the original titles (transliterated if in Arabic) and translations into English and Spanish of 631 pieces of work (films and video-art) made by Palestinian filmmakers and artists (on-going research)."

"This chronology of films made by Palestinian filmmakers is part of an audiovisual inventory of the traces that history has left in the 20th century. It consists of the (transliterated) original title and a translation into English and Spanish of 281 films (on-going research)."

Posted by Peter Magierski at 4:11 PM No comments: 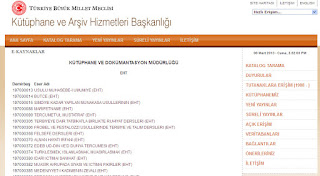 The French Institute for the Near East (Ifpo) is today at the service of all the disciplines of humanities and social sciences, from Antiquity to our times, and at the understanding of the Near East in general and that of Syria, Lebanon, Jordan, the Palestinian territories and Iraq in particular.
Strong with its three scientific departments (Contemporary Studies, Medieval and Modern Arab Studies and Archaeology and Ancient History), today Ifpo develops on a large academic spectre, thanks to collaborations by which its researchers are appreciated by the societies that host them, as well as with the rest of the academic community, to collectively build its shared scientific knowledge.
By putting up the works of its researchers online and open access on the HAL-SHS website, Ifpo achieves in particular an increase in their regional and international visibility. As much as possible, a systematic diffusion of abstracts (or articles) in English as well as Arabic (henceforth accepted on this open archive) should allow the Institute to augment the ‘transparency’ of its missions in its regional environment and favour a more systematic interaction with the international academic community as a whole.

And see also Open Access Collections of the IFPO
Posted by Chuck Jones at 7:43 PM No comments: