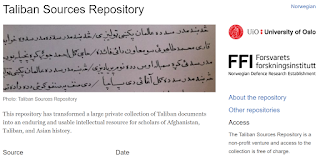 The Taliban Sources Project (TSP) is one of few Taliban documentation projects in existence and is the only collection to include the cultural, social, and legal output for the years 1979-2011.

The TSP has transformed a large private collection of Taliban documents into an enduring and usable intellectual resource for scholars of Afghanistan, Taliban and Asian history.

Compiled between 2006 and 2011 by researchers based in southern Afghanistan, the TSP collection is one of only a few such private documentation projects in existence, and is the only collection to include Taliban’s cultural, social and legal output for the years 1979-2011.

Background
The TSP was initially started by Thesigers, which processed and translated the materials presented on this website over a two-year period (2013-2015), in order to ensure the survival and public accessibility of this unique corpus of primary sources.

The Taliban Sources Project (TSP) was launched online in 2020 by the Norwegian Defence Research Establishment (FFI) in cooperation with the University of Oslo.

Quoting
If you use any of the material in the collection, please include a reference to the Taliban Sources Project at FFI/UiO.

Contact
If you have questions or feedback regarding the TSP, please send us a mail at tsp-contact@ikos.uio.no.

Link: https://www.hf.uio.no/ikos/english/research/taliban-sources-repository/
Posted by Sean Swanick at 1:49 PM No comments: 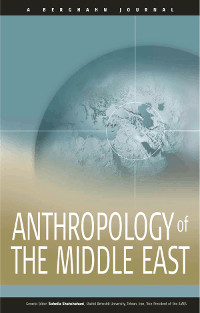 
Alphabetical List of Open Access Journals in Middle Eastern Studies
Posted by Peter Magierski at 11:28 AM No comments:

The series Islamkundliche Untersuchungen which is published by the Klaus Schwarz Verlag since 1970 is one of the outstanding publications of Islamic studies in Germany. Klaus Schwarz Verlag and Universitaets- und Landesbibliothek Sachsen-Anhalt in Halle plan to publish digital versions of titles that are no longer available in print in the electronic fulltext repository MENAdoc of the Middle East Virtual Library MENALIB in the future. 10 titles have been digitised in April 2009 and are being made available in a first step towards a more comprehensive presentation of Islamkundliche Untersuchungen on the WWW.

196 volumes of the series are currently available
Posted by Andreas Neumann at 4:30 PM No comments: 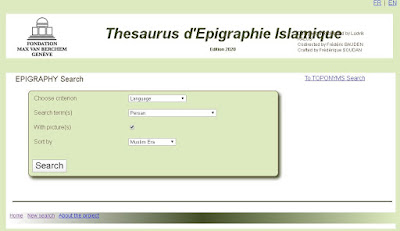 "This project aims to bring together all the Arabic, Persian, and Turkish (or even in other languages) inscriptions of the Muslim world until the year 1000 AH, that is to say, the period usually identified as the Middle Ages.
The collection and computerization of the inscriptions began in the late 1980s, the whole Muslim world now being covered. Currently, the database contains some 49,500 cards that critically present the text of the inscriptions already published, while certain texts are presented for the first time. Inscriptions known to exist because they are mentioned in publications of all kinds are also taken into consideration. Many of the inscriptions are illustrated with photographs from the Max van Berchem Foundation Photo Library as well as from other collections. It is also now possible to consult the website in English (however the contents of the cards remain in French)."

Registration required.
Posted by Peter Magierski at 1:27 PM No comments:

Email ThisBlogThis!Share to TwitterShare to FacebookShare to Pinterest
Labels: Epigraphy

"Medieval and Early Modern Orients (MEMOs) is an AHRC-funded project that seeks to further knowledge and understanding of the early interactions between England and the Islamic worlds. Through our pages and our blog we hope to create an accessible space to reveal the exciting discoveries of researchers as they navigate the seas of history and literature, and investigate the intersecting webs of our pasts.

Like the engagements it explores, MEMOs is also a point of engagement. It is a space for researchers, practitioners and anyone with an interest to connect and stay up-to-date with news and events in the field, as well as the work of colleagues and specialists. By this we hope to build a network of knowledge and appreciation around the longstanding global relationships that continue to define our interconnected identities and shape our world."

Website: https://memorients.com/
Posted by Sean Swanick at 1:02 PM No comments:

Digital Sources for the Study of the Ottoman Empire and Turkey 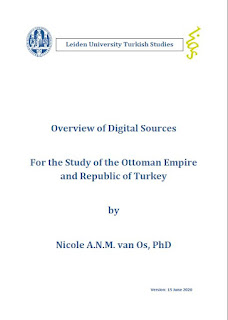 Digital Sources for the Study of the Ottoman Empire and Turkey.
by Nicole A.N.M. van Os, PhD

"Increasingly, primary sources from the period before the emergence of digital media are being digitized. These “digital surrogates” have facilitated the work of (historical) researchers; instead of having to visit several archives, libraries and other places, the (primary) sources appear in front of them on their screen while they are sitting in their study at home or the university."

Posted by Peter Magierski at 11:04 AM No comments:

UPDATE:
Digitized content from the Arabic and Middle Eastern Electronic Library (AMEEL)
has been moved to another platform. Updated links are available here :   http://findit.library.yale.edu/catalog/digcoll:2835720
and on the
Alphabetical List of Open Access Historical Newspapers and Other Periodicals in Middle East & Islamic Studies
NOTE : AMEEL collection is full text searchable (with the known OCR limitations)

Posted by Andreas Neumann at 3:30 PM No comments:

"The purpose and scope of the project is to provide an open, collaborative, referencable, and scholarly digital edition of Muḥammad Kurd ʿAlī’s journal al-Muqtabas, which includes the full text, semantic mark-up, bibliographic metadata, and digital imagery. All files but the digital facsimiles are hosted on GitHub."

Website: https://openarabicpe.github.io/.
Posted by Sean Swanick at 2:20 PM No comments:

"The Egyptian Gazette, a daily newspaper catering to English and French speaking residents of Alexandria, began publication in 1880. This website is product of a digital microhistory course at Florida State University, which was offered for the first time in fall 2016. The aim of this course is to produce a digital version of the paper for the years 1905-8, including full structure and content markup. This website presents the contents of the paper, and host student analysis of our findings."