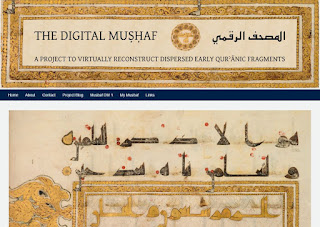 With thanks to Robin Dougherty.
Posted by Sean Swanick at 11:16 AM No comments: 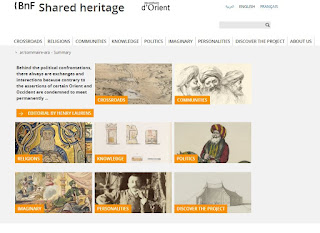 "This searchable web site began in 2016 by the Bibliothèque National de France and seven heritage and research libraries in Cairo, Alexandria, Beirut, Istanbul and Jerusalem. It was created to reveal the permanence and wealth of the scientific, intellectual and interreligious exchanges in this region. It is for researchers, teachers and students, and for all those who want to broaden their understanding of this region of the world, in its historic depth, so as better to grasp current events. It will be updated over time when new resources are obtained. Collaboration of the Bibliotheque Nationale de France and international partners to create and curate open access thematic collections of digitized material from and about the Middle East."

Posted by Peter Magierski at 10:28 AM No comments:

"Within the framework of a project supported by the Ministry for Innovation, Science and Research of the state of North-Rhine Westphalia (duration 1.11.2013 – 31.10.2014) the Institute for Oriental and Asian Studies of the University of Bonn would like to research how European concepts had been discursively acquired between 1860 and 1945 in Asian and Middle Eastern societies.The aim of the project is to make the very scattered source materials on – to a scientific high degree innovative and for numerous colleagues connectable theme “Translation. The cognitive acquisition of European key concepts in Asian and Middle Eastern societies (1860-1945)” in a first step digital and in one place accessible. Relevant sources from the Middle Eastern and Asian saddle period shall be digitised, exploited and put on the research platform for evaluation and further work from the period 1860-1945: periodicals, lexica, encyclopedias, political publications, remissions and Ego-documents. As periodicals are the basis of the developed public sphere of the aforementioned period, these periodicals form the most important and most extensive primary texts for a conceptual history."

52 titles have been digitized in Arabic, Persian and Ottoman.

Posted by Sean Swanick at 12:27 PM No comments: