Adalah's Review Volume 5 - On Criminalization (Spring 2009)
Volume 5 of Adalah’s Review takes as its point of departure a theme raised in the previous volume, the question of political dissent by Palestinians – in this case dissent by Palestinian citizens of Israel and the occupied Palestinian population – and explores ways in which dissent has been criminalized. The articles in this volume examine a range of channels pursued by Israel to this end, including holding political trials of Palestinian political leaders, legislation aimed at further entrenching the criminalization of political dissent, the operation of the military court system, and the creation of the category of “security prisoner” within the Israeli prison system, which ...

Adalah's Review Volume 4 - In the Name of Security (Spring 2004)
From the introduction, by Samera Esmeir: It is difficult to devote an issue of a critical journal published by a human rights organization to the theme of “security.” For in such a case, the work of critique is expected to juxtapose security considerations with human rights, and to reveal the violations of the latter carried out “in the name of security.” Demography, Arab-owned lands, Arab Palestinians moving and crossing borders, political dissent, certain forms of knowledge, speech, memory and the relationship to the past – all of these, as the articles in this issue elaborate, have been realized as security concerns in Israel. The term security contains the reasons, the ...

Adalah's Review - Volume 3 - Law and Violence (Summer 2002)
Law and violence are often understood to be opposites. The rule of law is conceived of as constituting an orderly alternative to violence. In abandoning this dichotomous depiction of law and violence, legal scholar Robert Cover describes how law manages to work its lethal will while distancing itself from its violent deeds. Violence, others argue, provides the method for establishing legal order, the means through which law works, and the reason for having law.

Adalah's Review Volume 2 - Land (Fall 2000)
Volume II of Adalah's Review focuses on the issue of land, which is the main subject responsible for the existing tension between the state and the indigenous Palestinian community. It also includes a special discussion on the implications of the Supreme Court's March 2000 judgment in Qa'dan, which concerns the right of a Palestinian family to live in a Jewish settlement in Israel, and highlights Adalah's recent legal work in different fields.

Adalah's Review Volume 1 - Politics, Identity and Law (Fall 1999)
Adalah published the first volume of its new journal, entitled Adalah's Review, in December of 1999. Adalah's Review is intended to open a critical stage for discussion of Israeli law, the legal system and legal discourse, specifically focusing on subjects that relate to the status of the Palestinian minority in Israel. The journal is published in Arabic, Hebrew and English. The English edition, which contains slightly differing content, is also meant to provide general background to some of the debates taking place - legally, politically and socially - between the Palestinian minority and the Israeli Jewish state, and to introduce Adalah's work to the broader international community.


Alphabetical List of Open Access Historical Newspapers and Other Periodicals in Middle East & Islamic Studies
Posted by Peter Magierski at 3:53 PM No comments:

Posted by Peter Magierski at 11:38 AM No comments: 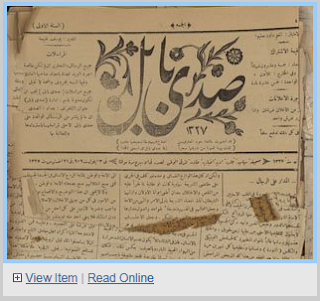 "Seda Babel (Echo of Babylon), first published in 1909 in Baghdad, was among Iraq’s earliest newspapers. It appeared weekly on Friday. Until the end of World War I, Iraq was part of the Ottoman Empire and was subject to Ottoman law. In 1908, in line with the liberalizing revolution of the Young Turks, imperial press regulation loosened, allowing Iraq’s intellectuals and writers the freedom to publish newspapers, magazines, and books..."

Posted by Peter Magierski at 10:42 AM No comments: 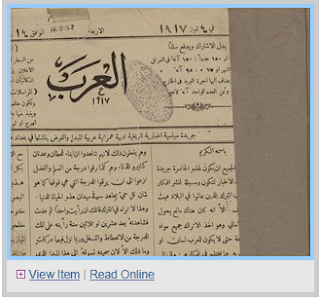 "The newspaper Al-Arab (The Arabs) was first published in Baghdad on July 4, 1917, some four months after British troops captured the city from the Turks, thereby ending three centuries of Ottoman rule.
The paper appeared at a critical period in the history of Iraq. Issued by the British authorities, it served as a mouthpiece for the British administration at a time of rising Iraqi and Arab nationalism. It depicted the Ottomans as foreigners and the British as liberators and sought to advance broader British military and political strategy against the Ottomans in World War I"


Posted by Peter Magierski at 10:42 AM No comments:

"The United Nations Relief and Works Agency (UNRWA) is proud to unveil the first part of its newly digitized archive, which consists of over half a million negatives, prints, slides, films and videocassettes covering all aspects of the life and history of Palestine refugees from 1948 to the present day.
The first group of iconic photographs and films are part of an exhibition, ‘The Long Journey’, which opens on 28 November at the Al-Ma’mal Centre in the Old City of Jerusalem. The archive was inscribed on the UNESCO ‘Memory of the World’ register, which includes collections of outstanding cultural and historical significance."

Posted by Peter Magierski at 1:27 PM No comments: