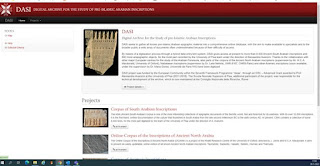 "DASI seeks to gather all known pre-Islamic Arabian epigraphic material into a comprehensive online database, with the aim to make available to specialists and to the broader public a wide array of documents often underestimated because of their difficulty of access.

By means of a digitization process through a hybrid data entry/xml system, DASI gives access at present to more than 8,400 Ancient South Arabian inscriptions and 600 more anepigraphic objects, for the most part recorded by the University of Pisa team under the direction of Alessandra Avanzini. Thanks to the collaboration with other major European centres for the study of the Arabian Peninsula, also parts of the corpora of the Ancient North Arabian inscriptions (supervision by Mr. M.C.A. Macdonald, University of Oxford), Nabataean inscriptions (supervision by Dr. Laila Nehmé, UMR 8167, CNRS-Paris) and other Aramaic inscriptions (soon available, under the supervision by Dr. Maria Gorea, Université de Paris VIII) have been digitized.

DASI project was funded by the European Community within the Seventh Framework Programme “Ideas”, through an ERC – Advanced Grant awarded to Prof. Alessandra Avanzini at the University of Pisa (2011-2016). The Scuola Normale Superiore di Pisa, additional participant of the project, was responsible for the technical development of the archive, which is now maintained at the Consiglio Nazionale delle Ricerche, Rome."

Posted by Birte Kristiansen at 11:45 AM No comments:

Empires and Communities in the Post-Roman and Islamic World, C. 400-1000 CE 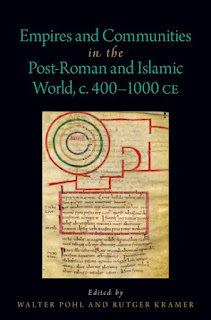 "This book deals with how empires affect smaller communities such as ethnic groups, religious communities, and local or peripheral populations. It raises the question of how these different types of community were integrated into larger imperial edifices and in which contexts the dialectic between empires and particular communities caused disruption. How did religious discourses or practices reinforce (or subvert) imperial pretenses? How were constructions of identity affected? How were Egyptians accommodated under Islamic rule, Yemenis included in an Arab identity, Aquitanians integrated into the Carolingian Empire, Jews into the Fātimīd caliphate? Why did the dissolution of Western Rome and the Abbasid caliphate leave different types of polities in their wake? How was the Byzantine Empire preserved in the seventh century; how did the Franks construct theirs in the ninth? How did events in early medieval Rome and Constantinople promote social integration in both a local and a broader framework? Focusing on the post-Roman Mediterranean, the book deals with these questions from a comparative perspective. It considers political structures in the Latin West, Byzantium, and the early Islamic world in a period exceptionally well suited for studying the expansive and erosive dynamics of empires and their interaction with smaller communities. By never adhering to a single overall model and avoiding Western notions of empire, this volume combines individual approaches with collaborative perspectives. The chapters are in-depth studies written in full awareness of the other contributions; taken together, they constitute a major contribution to the advancement of comparative studies on premodern empires."

Posted by Birte Kristiansen at 11:56 AM No comments:

Open Access E-book: Amulets and Talismans of the Middle East and North Africa in Context 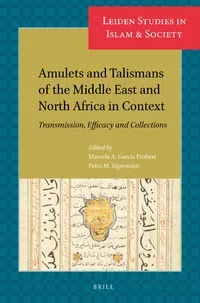 In this volume amulets and talismans are studied within a broader system of meaning that shapes how they were manufactured, activated and used in different networks. Text, material features and the environments in which these artifacts circulated, are studied alongside each other, resulting in an innovative approach to understand the many different functions these objects could fulfil in pre-modern times. Produced and used by Muslims and non-Muslims alike, the case studies presented here include objects that differ in size, material, language and shape. What the articles share is an all-round, in-depth approach that helps the reader understand the complexity of the objects discussed and will improve one’s understanding of the role they played within pre-modern societies.

Posted by Birte Kristiansen at 11:41 AM No comments: