Posted by Chuck Jones at 9:46 AM No comments:

The American Numismatic Society has created an Open Access digital library. One purpose is to host unpublished and/or orphaned MA and PhD theses/dissertations that have numismatic content. As a part of this library your thesis will be Open Access, full-text searchable, and http://schema.org  properties will help Google relevance. If you (or someone you know) wants their research hosted for free (CC-BY license) alongside other numismatic work, email Andrew Reinhard at areinhard@numismatics.org.

Posted by Chuck Jones at 9:23 PM No comments:


The Origins of Doha is a UCL Qatar research project, supported by the Qatar National Research Fund and aims to explore the foundation and historic growth of Doha, its transformation to a modern city, and the lives and experiences of its people, through a combination of archaeological investigation, historical research and oral testimony.

This interactive web resource presents some of the project's research, tracing of the changing physical extent and urban configuration of Al Bidda and Doha through time, using historic maps, photographs, historic building recording and the excavation of archaeological deposits.

This website was made possible by NPRP grant no. 5-421-6-010 from the Qatar National Research Fund (a member of Qatar Foundation). The statements made herein are solely the responsibility of the authors. - See more at: http://www.spatialheritage.org/doha/#sthash.i5ylTfHK.dpuf

Posted by Chuck Jones at 6:59 AM No comments:

The following Open Access books of interest to AMIR are available from Brill Publishing :

Our catalog of 6,500 numismatic pieces – coins, glass weights, dies, medals, etc. - is the third major catalog of Islamic numismatic material held in the Egyptian National Library, formerly the Khedivial Library, Egypt’s most important library. Our catalog differs from its predecessors in a number of ways. First, it is a new catalog in that we had to read the inscriptions from the digital images which were taken under difficult and rushed conditions and not from the actual objects for reasons which are explained in the section entitled Introduction. Second, we included in this electronic catalog inscriptions in Arabic as Dr. Sherif Anwar read them, which was never possible in the previous studies because of costs. Inscriptions in European languages and references are the work of Dr. Norman D. Nicol from the 1982 catalog of the collection.

Third, images of every piece are part of this catalog, which was financially impossible when the earlier catalogues were published. Fourth, the images are in color which modern technology permits at no additional cost. On the other hand the Egyptian National Library required that all images used on this webpage carry a watermark. Images without watermarks of specific items can be acquired by contacting the Egyptian National Library citing the 1982 catalog number, which is the last number in the title listing for each item. Fifth, whenever a mint was named and could be located, an accompanying map is included on the webpage. Finally, as far as possible, all the data and search tools are available in both Arabic and English for the first time in a catalog. Electronic searches in Arabic and English can by undertaken by going to the category “browse” and then using the various lists to narrow the search. In order to find a specific piece based upon its 1982 catalog number go to the heading “search” and under “keyword” go to “recordId” and type in the appropriate number.

This project is a result of the cooperation of the Egyptian National Library and Archives and the American Numismatic Society with funding from USAID through the American Research Center in Egypt. This electronic catalog is made available under the Open Database License. It is powered by Numishare and numismatic concepts defined on Nomisma.org. 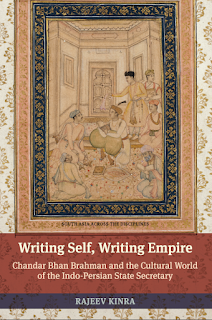 Writing Self, Writing Empire: Chandar Bhan Brahman and the Cultural World of the Indo-Persian State Secretary.

"Writing Self, Writing Empire examines the life, career, and writings of the Mughal state secretary, or Munshi, Chandar Bhan 'Brahman' (d. c.1670), one of the great Indo-Persian poets and prose stylists of early modern South Asia. Chandar Bhan's life spanned the reigns of four different emperors, Akbar (1556-1605), Jahangir (1605-1627), Shah Jahan (1628-1658), and Aurangzeb 'Alamgir (1658-1707), the last of the 'Great Mughals' whose courts dominated the culture and politics of the subcontinent at the height of the empire's power, territorial reach, and global influence"
Posted by Peter Magierski at 4:47 PM No comments:


The Middle Eastern Studies Student Association academic journal serves to voice undergraduate research focusing on issues that are pivotal to Middle Eastern affairs. Striving to foster and enhance undergraduate research, this journal enables students to present their work and facilitates a breadth and depth of discussion about respective economic, political and social affairs in this pulsating region of the world.


See the Alphabetical List of Open Access Journals in Middle Eastern Studies
Posted by Chuck Jones at 5:44 PM No comments:

Email ThisBlogThis!Share to TwitterShare to FacebookShare to Pinterest
Labels: Qatar

HHSS, a peer-reviewed journal published by the CHSS at the UAEU, publishes original research articles in all areas of Humanities and Social Sciences.

This journal was previously published as the Journal of the College of Humanities and Social Sciences, from 1985 to 2005. Previous issues can be viewed online here.

See the Alphabetical List of Open Access Journals in Middle Eastern Studies
Posted by Chuck Jones at 4:02 PM No comments: