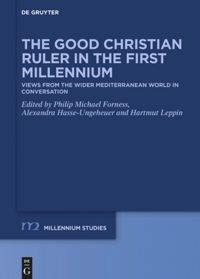 The Good Christian Ruler in the First Millennium

Views from the Wider Mediterranean World in Conversation

"The late antique and early medieval Mediterranean was characterized by wide-ranging cultural and linguistic diversity. Yet, under the influence of Christianity, communities in the Mediterranean world were bound together by common concepts of good rulership, which were also shaped by Greco-Roman, Persian, Caucasian, and other traditions. This collection of essays examines ideas of good Christian rulership and the debates surrounding them in diverse cultures and linguistic communities. It grants special attention to communities on the periphery, such as the Caucasus and Nubia, and some essays examine non-Christian concepts of good rulership to offer a comparative perspective. As a whole, the studies in this volume reveal not only the entanglement and affinity of communities around the Mediterranean but also areas of conflict among Christians and between Christians and other cultural traditions. By gathering various specialized studies on the overarching question of good rulership, this volume highlights the possibilities of placing research on classical antiquity and early medieval Europe into conversation with the study of eastern Christianity."

This book includes articles on the early Medieval Islamic world as well.

Posted by Birte Kristiansen at 12:24 PM No comments: