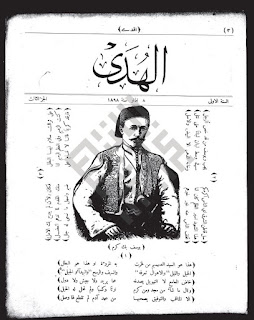 
"Al-Hoda, or الهدى, [The Guidance] was the longest-lived of the early Arabic newspapers, published from 1898 until 1972. It was distinguished by its wide circulation--which ranged throughout North America but also stretched, by some claims, across 40 countries worldwide--and its corresponding transnational sphere of influence. Throughout its 74-year run it was owned and published by the Mokarzels, an influential family of Lebanese-Americans: it passed from the hands of its founder Naoum Antoun Mokarzal to his brother Salloum Antoun Mokarzel; upon Salloum’s death in 1952 it was published by Salloum’s daughter Mary Mokarzel. It served as an outlet for the Mokarzel brothers to shape both the Lebanese independence movement and to craft and transmit cultural and linguistic cohesion throughout the mahjar, or Arabic diaspora. In addition to its close association with Naoum and Salloum Mokarzel, it was a launching point and platform for the careers of many important writers; significantly, it published work by the women writers Marie T. Azeez and Afifa Karam. It also published numerous pieces from foreign correspondents throughout the Arab world. Though its format and content shifted throughout the decades, particularly as ownership changed hands between members of the Mokarzel family, Al-Hoda was consistent in its journalistic commitment to transnational issues and events and its  engagement with the Arabic-speaking diaspora."

See: Alphabetical List of Open Access Historical Newspapers and Other Periodicals in Middle East & Islamic Studies
Posted by Peter Magierski at 11:58 AM