Open Access Report: Afghanistan in 2016: A Survey of the Afghan People 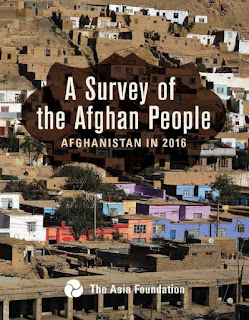 Afghanistan in 2016: A Survey of the Afghan People

"The national mood in Afghanistan is at a record low, and Afghans are pessimistic because of insecurity, corruption, and rising unemployment and slow job growth. At the same time, more Afghans, particularly rural Afghan men, now support women’s right to vote and women’s right to work outside the home than ever before. The 2016 Survey of the Afghan People polled 12,658 Afghan respondents from 16 ethnic groups across all 34 provinces, including insecure and physically challenging environments. The annual survey is the longest-running and broadest nationwide survey of Afghan attitudes and opinions. Since 2004, the Survey has gathered the opinions of more than 87,000 Afghan men and women, providing a unique longitudinal portrait of evolving public perceptions of security, the economy, governance and government services, elections, media, women’s issues, and migration."
Posted by Peter Magierski at 2:35 PM