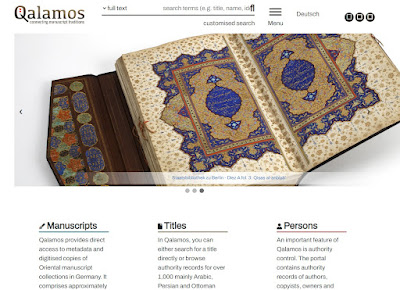 Qalamos is a portal for manuscripts from Asian and African writing traditions. The portal is being developed as part of the DFG project "Orient-Digital". Project partners are the Bavarian State Library in Munich, the Gotha Research Library, the Berlin State Library and the University Computer Center in Leipzig.

"In Qalamos, you can either search for a title directly or browse authority records for over 1,000 mainly Arabic, Persian and Ottoman Turkish works, which are partly linked to title records of the Integrated Authority File ( GND ) and Library of Congress Authorities ..."

"An important feature of Qalamos is authority control. The portal contains authority records of authors, copyists, owners and other individuals connected to a manuscript. ... "

Posted by Peter Magierski at 12:56 PM