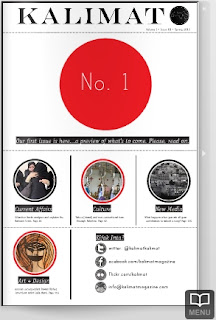 First issue of Kalimat Magazine has been published.

Kalimat Magazine is committed to rejuvenating Arabic culture by providing an outlet for political, cultural and social expression within the Arab region and its Diaspora. At the same time, it is a visual communication tool that serves to change Western perception of Arabs. The purpose is to be an open outlet for expression and to increase participation within the cultural/creative scene, therefore, the content is created by Arab people, the writers are Arab, the editor is Arab, the people featured are Arab.

The name “Kalimat”, which means “words” is inspired from the Magda Roumi song of the same name. The song is written by Syrian poet Nizar Qabbani.

There are plans to publish Arabic and French editions.

Posted by Peter Magierski at 9:31 AM