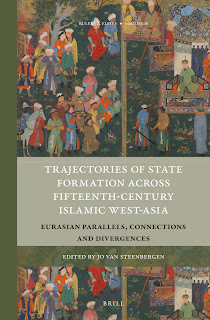 "The concept, practice, institution and appearance of ‘the state’ have been hotly debated ever since the emergence of history as a discipline within modern scholarship. The field of medieval Islamic history, however, has remained aloof from most of these debates. Rather it tends to take for granted the particularity of dynastic trajectories within slow-changing bureaucratic contexts. Trajectories of State Formation promotes a more critical and connected understanding of state formation in the late medieval Sultanates of Cairo and of the Timurid, Turkmen and Ottoman dynasties. Projecting seven case studies onto a broad canvas of European and West-Asian research, this volume presents a trans-dynastic reconstruction, interpretation and illustration of statist trajectories across fifteenth-century Islamic West-Asia. "

Posted by Peter Magierski at 8:23 PM